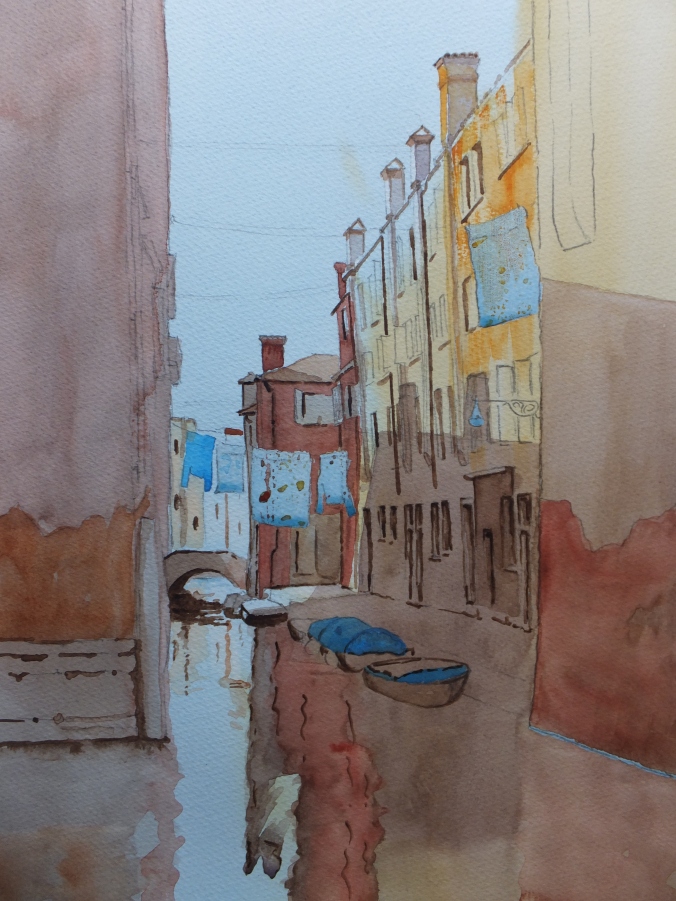 About halfway through the painting, and if I were smart I would wait for the painting to be finished completely, before showing it. However there are things to be talked about before they are covered by further work.

We left the picture as a drawing with some items masked out, namely the washing on the line. The sky in my usual mix of phthalo blue and cobalt blue, I washed down through the bridge and used for the water. I scrubbed out the distant buildings and painted them in with their reflections.  The tricky bit was the shadows which I had worked out with the sketch. I painted them in twice to get some depth whilst still allowing some transparency and continued into the reflections in the water.

In the photograph you may remember the building at the end was red. I have painted that in using Venetian Red appropriately enough, and have taken that through the reflections.

Venetian Red goes back to the days of the Renaissance. It is a warm red earth colour derived from Ferric Oxide, which always sounds like rust to me. It was used by Renaissance painters mixed with white to make skin tones. It was also called Sinopia, because the best quality pigment came from Sinop in Northern Turkey

It was expensive. If your house was painted in this colour, then you were a man of some means.

Francesco da Mosta in his lovely book, Francesco’s Venice tells us that the art of mixing pigments in Venice was something akin to alchemy. The secrets were closely guarded. Venice was a city of painters, who demanded the best

Still some shadow to be deepened, as well as detailing to be done. I need to work out a green for the shutters, which should also work with the red buildings. So more to do!

Someone phoned with a commission today which is always welcome. Someone who has bought my paintings before wants me to paint somewhere memorable, so something to look forward to.