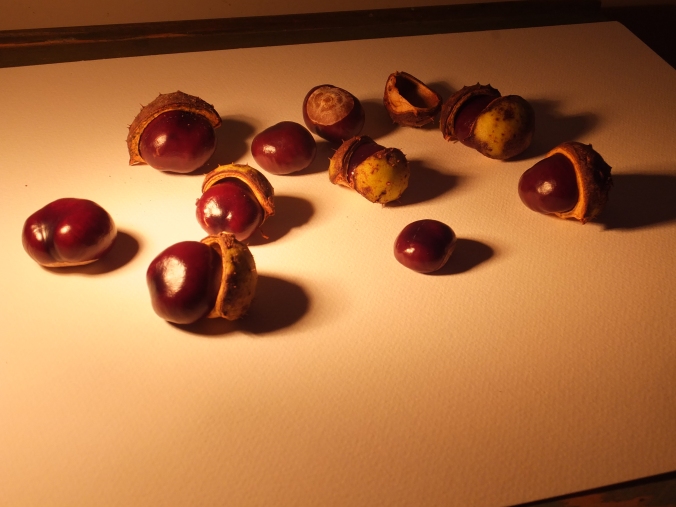 I painted “conkers” a few years back, and the painting sold fairly quickly, and can be seen on my website davidharmerwatercolour.co.uk. I thought I would do another version, so assembled this little still life from a neighbouring tree, a few weeks ago, and photographed it, to do later at my leisure. It is very important that the conkers are fresh from their husks so that the finish is nice and glossy in order to reflect the light. These are beautiful like polished mahogany

If you were a schoolboy in the 1950s like me, these were highly prized as they would be used every autumn in the game of yes,…conkers. They are, of course, the nut from the horse chestnut tree, the non-edible version. We would drill each one with a skewer, and thread them with string, tying one end off with a large knot. Then let combat commence. Players would take it in turns to bash each other’s conker until one split and fell off the string. The one left intact was the winner. Players would count the number of “kills” and accord them to their own champion, so it would be a “sixer” or “tenner” or whatever.

Competition was fierce and led to devious practices, like baking your conker in the oven to make it rock hard, or soaking it in vinegar so that it pickled. I was never sure that helped, but people did it nonetheless

Sadly, in this millenium, the game was banned by several schools, thanks to a jaundiced view of people’s safety. Headmasters thought a piece of nut could fly off and hit someone in the face! Anything is possible, but in my long experience of the game, nothing like this ever happened. Someone even suggested that players were at risk from “nut-allergy”!! Absolutely no evidence for that whatsoever. Incredible when one thinks of the disabling injuries from playing rugby or from boxing, which young people are encouraged to play

I haven’t seen anyone playing conkers now for years, probably because a generation have never known what it is, so the tradition hasn’t been handed down. I believe that the game of conkers has resurfaced in the United States, so maybe it will come back to us from across the pond.  Comments appreciated if you have any information on that

In the event, my interest for now is in the aesthetic as much as the nostalgic. I have made a drawing from this grouping, which is rather too faint to show, so I will get some colours together, and post another time about the painting exercise