This is the side elevation of the house, medieval but clad in c16 brick. This is the old part as if any of it is recent! Not exactly art but certainly architecture and the Arts

The house is associated with Henry VIII who gave it to one of his favourites in 1534, a man called Courtenay. This was about the time that Thomas Cromwell was gathering strength, and being more proficient in the black arts, managed to persuade the king, that Courtenay was a Catholic and a subversive. Courtenay was executed. This was about the time of Henry’s break with Rome which was unpopular, and which increased Henry’s paranoia. He was prone to striking down anyone whom he suspected of subversion, with or without evidence

The Raleighs later owned the house. Sir Walter the well-known colonist of North America, who fell foul of James I, was executed in 1618. The house, through his brother-in-law, was left to Raleigh’s surviving son Carew. There is a story, well-known, that Raleigh’s head was rescued from its pike on London Bridge, and dropped onto a waiting boat on the river. The head was kept by his widow wrapped in a velvet cloth, for some years at West Horseley. Later Carew’s two sons and baby daughter, all of whom died of an epidemic, were buried under the floor of St.Mary’s Church nearby. The head was buried with them

To come up-to-date, the house was bequeathed two years, unexpectedly, by the then owner the duchess of Roxburgh, to Bamber Gascoigne. People of my age will remember him as the host of that erudite TV quiz University Challenge, which he presented for many years since its inception. Today it is still running and hosted by Jeremy Paxman, who is good, but not the same. We toured the house recently, with a group from Guildford museum, and were privileged to be shown round by Bamber himself. His voice still sounds the same despite the years. I kept expecting him to say, “Jesus, your starter for ten………………”

And now the most exciting development, the creation of the Theatre in the Woods. About a year or more ago, the Gascoignes were visited by one Lasfi Kani, the major force behind the Grange Park Opera Company. At the time this company had been based at another mansion in Hampshire, and had had their lease summarily terminated, and were looking for a new home. West Horseley was agreed upon and work started

Incredibly from the first sod being cut in June 2016, the programme was published and world class voices engaged with performance dates set for June 2017. Within that last twelve months, Ms Kani raised the £8 million needed to fund the building. The theatre stands now ready for performances next month. The first, Tosca is sold out already. The theatre is ready in that it has seats, and is weatherproof. There is still finishing work to be done

The house itself needs about £8 million spent on it to bring it up to standard, and the surrounding estate houses, another three. A charity has been formed to raise funds necessary 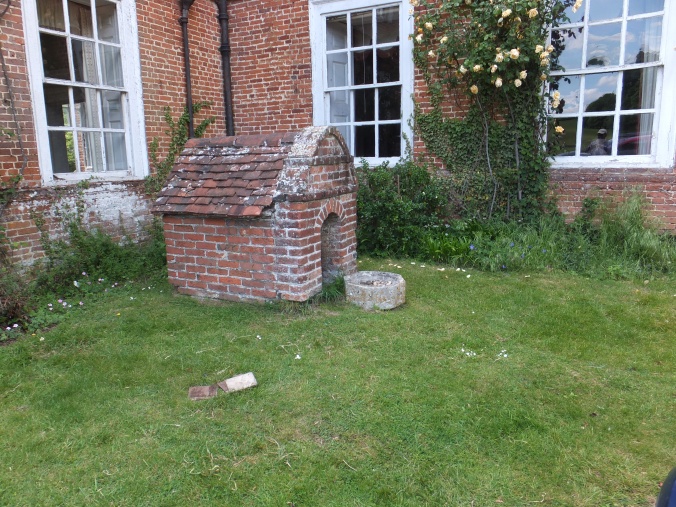 One of two c16 century dog kennels near the front door. Two outside the same house are unique. Both are Grade 1 listed

Years ago we went to the delightful little fishing village of Beer on the south Devon coast. These colourful boats were drawn up in a line on the beach, and I photographed them in several frames, as I have shown here

I painted them once and showed them. That painting sold. A year or two later, someone picked the painting out from the web site, and commissioned something like, so I painted something similar but not the same

At a craft fair recently I bought the frame in the photograph. The beading is Italian, heavily distressed and in a driftwood finish. The mount is split into four spaces, and is obviously intended for photographs.

It reminded me of something I had seen not long ago at an exhibition. An artist had used a frame like this using a long painting, which looked very effective, I thought. It obviously needs a long horizontal subject, which reminded me of the line of boats at Beer, so I am going to try it out. It may not work, as the spacing of the boats may be wrong, but I will try it anyway

If it turns out well, this could be my twelfth and last painting for the July exhibition, so we shall see

There are still things I look at and feel like going back and fiddling with, but I have learned to resist that, and have finally decided that the painting is finished

Since posting the underpainting, I have been back in with stronger versions of the Transparent Brown and Violet mix, bringing, I hope,  the image closer to the eye, as the detailing becomes sharper

I have had to resist making the detail of the basilica too sharp in order to give the impression of distance. The shadows in the garden and on the steps I have deepened. Likewise the foreground figures, with the obligatory spots of red in the foreground, which are discreet, but they are there.

If I can find a suitable frame, I should be able to include this one in my July exhibition at the Royal Surrey Hospital in Guildford

I bought recently an interesting frame in a driftwood texture, which is comparatively long with the mount divided into four spaces. They are usually used for photographs. I bought it at a craft fair recently. At the same fair, a watercolour artist was showing , and had included one of these frames with four individual pictures making up a wide scene, which looked very effective. I thought I might try something similar. Not the same picture, I hasten to add, but a retake on something I have done before of a long line of beached fishing boats in Devon

I have finally launched my Artfinder shop. The application form was a bit of a marathon, but the support staff were very helpful indeed. I know they are supposed to be, but sometimes they aren’t. The young woman at Artfinder who I think, took pity on me and patiently answered my questions, helping me over the hurdles, was truly excellent.

I have only listed six paintings so far, as the uploading can take a time, if like me you don’t get the sizing right always, but there will be more as time goes by. We’ll see how it goes 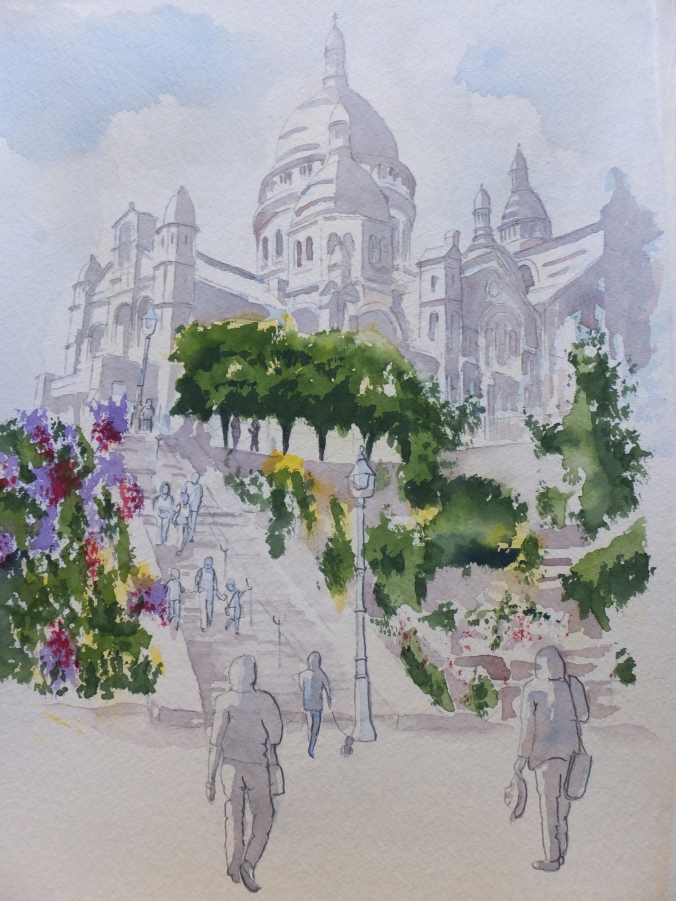 From the drawing I have got as far as providing a base coat for the painting. As you can see, I have added some foreground figures from my archive, just to deepen the composition

Basically I have put in the shadows, which in effect gives the subject its form. For the church and figures I have used a mix of transparent brown and violet, which has gone a bit too grey for my liking, so colder than I wanted. I had run out of Ultramarine Violet which I normally use, so used Windsor Violet instead which is more blue than I expected. I will run a wash of transparent brown over the shadow, when bone dry, just to warm them up, and then work in the detail.

I sometimes prefer this stage to the finished painting, when the buildings seem to loom out of the mist.

For reasons best known to myself, I have finished the trees and shrubs first. I don’t usually do that, and have probably made it hard for myself to strike the right tonal balance. Oh well, let’s hope it works out

I am also in the middle of trying to set up an online shop with Artfinder, who come recommended. Nothing like the sales that I enjoyed last year, either locally or from my own website. Maybe it is the Brexit effect slowing down our economy. Anyway I have to try something different, so I will doubtless post when I have done it successfully, and also on social media