Pleased with it, and pleased to finish as well. The sea seemed to work in this painting. It doesn’t always. I like the way the wet sand finished up too.

So this one goes for framing and will form part of “Watercolour Wanderings” exhibition. I think I have enough now, so might be able to do something more experimental, if I have both exhibitions sorted

Wouldn’t mind having a go at portrait work again. Not successful with faces. Might try again

I expect that I will persuade myself that one more Venice picture is needed though!

This year celebrates 150 years since the birth of Wells. He made Woking famous or infamous with his great work War of the Worlds, siting the landing of the Martians on nearby Horsell Common.

One of the first such events is an art exhibition in the Lightbox Gallery inspired by War of the Worlds, which runs now until May 1st. I went today, and there are some extremely imaginative entries by well-known local artists. The winning artwork I publish with this article. If you are local, this exhibition is worth seeing

He came to Woking in 1895, after the end of his first marriage, with student Amy Catherine Robbins, otherwise known as ‘Jane’. They married in the October of that year and lived happily at 141 Maybury Road, although the house was called Lynton at the time.

Wells lived in Woking for less than 18 months and yet it was his most productive time as an author. He worked at a prodigious rate to establish himself as a writer, which he did, as by the time he left, he was in his own words “fairly launched at last”

He wrote the Time Machine fairly soon after his arrival, his first science fiction work. He planned and wrote War of the Worlds, and sited the action in and around Woking, a most unlikely place for an extra-terrestrial invasion.

He followed up with the Invisible Man, completed the Island of Dr.Moreau, wrote and published both The Wonderful Visit and a pioneering cycling novel called The Wheels of Chance. He began writing When the Sleeper Wakes, another science fiction story, and started on Love and Lewisham. He worked in his own words at “a ghastly pace” in order to make his fortune

Later that summer, the couple moved to Worcester Park, and the story leaves Woking. He went on to international acclaim, meeting statesmen like both Presidents Roosevelt, Lenin and Stalin.

Later, there are talks at the Lightbox and two guided walks by historian Iain Wakeford, culminating in an International Conference in July at the H.G.Wells Conference and Events Centre in Woking

I don’t normally publish halfway through a painting if I can help it, but I have several family commitments over the next few days, so doubt if I will get away to the easel for a while

But the painting is underway, and with the usual reservations about my photography, I am reasonably happy so far. If you remember the photograph from a previous post, there is bright sunshine and consequently deep shadow. These are always fun to do, as they give depth and heighten the drama of the picture

i used my usual “Mediterranean” mix for the sky of Phthalo blue and Cobalt and let that run down for the first wash of the sea. I let that run down onto the buildings and let it mix with the Raw Sienna/ Naples Yellow mix I used for them.In the case of the building far left top, this worked quite well as these buildings were white yet in shade, so the effect was ethereal, and I let that stay. The rest I have sharpened up with detailing

The tricky part will be the sea with white foam. I have masked out here and there to give myself a guideline, but will have to do some work with white body paint. Also wet sand with reflections will be challenging too. The dog walking couple I have part masked to provide a sunlit edge coming in from the left, otherwise I can just paint across them

I will cautiously call this “so good so far”, and leave it there 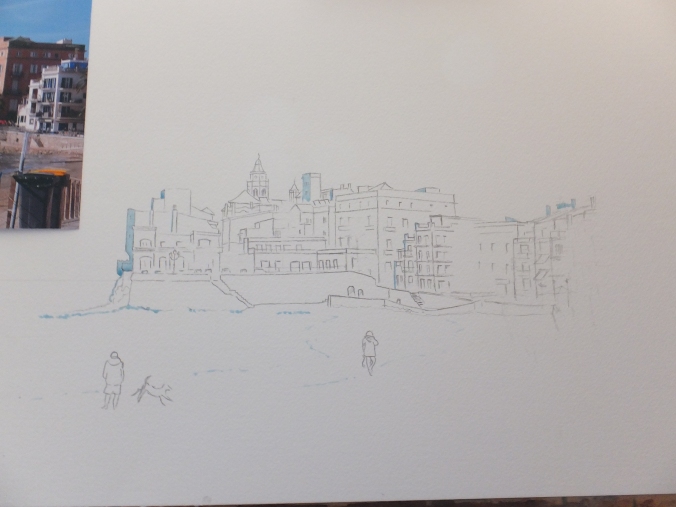 This is the drawing now transferred onto watercolour paper. I hope you can make it out. Obviously only lightly pencilled in as I want it to be covered by the painting.

One or two areas are covered by the blue masking fluid, especially the building on the far left which is sparkling in the sunlight. I want a hard edge there, and likewise in one or two other places which are caught by the sun. I have denoted white foam in the sea where I might otherwise lose it, although I shall have to enhance later with white gouache.

I have kept the foreground figures to two plus dog. Hopefully I should get some pleasing reflections on the wet sand from the buildings which will need some space in the foreground

Spaces have been left amongst the buildings too, for large areas of shade and for trees. Soon I shall have to pick up a paint brush and start. I still get apprehensive until I get underway

As well as this I have been trying to finalise my entries for my next forthcoming solo exhibition, which will be in Guildford, a town near me, in one of the town’s best known venues, the Guildford Institute. Always an enjoyable place to show, albeit not especially busy, but nevertheless because of the prestige of the place, I am able to get good coverage in local papers, which is so very useful 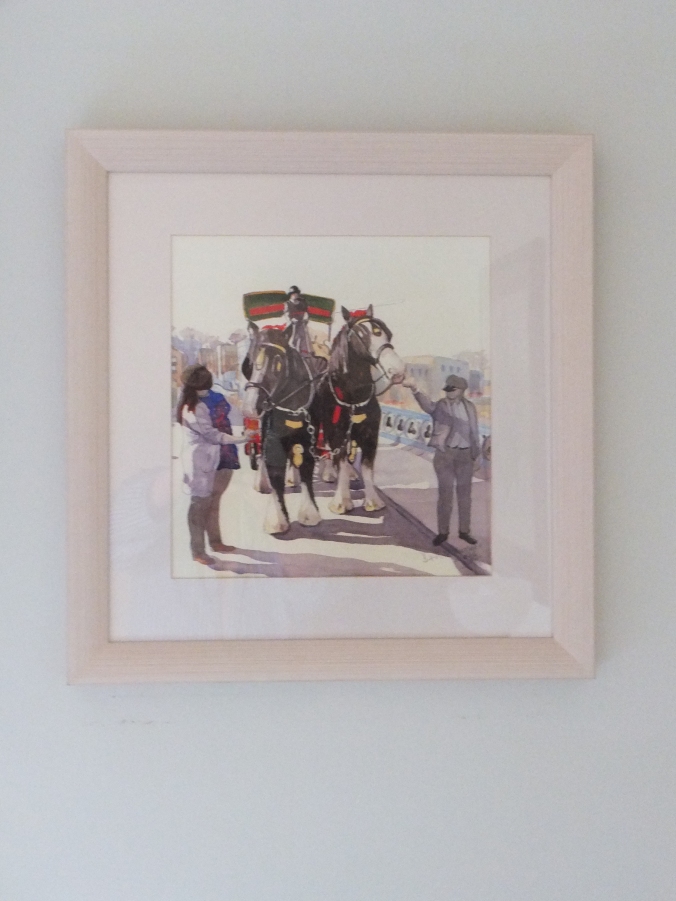 You may well have seen these in earlier posts, but it is nice to see them framed, and ready to be exposed to an unsuspecting public. I am aiming to show between 12-14 pictures in total. I am almost there.Still time to make some revisions, and certainly if the Sitges painting turns out well, I shall want to include that too. The exhibition, if I haven’t said before has a theme entitled “Watercolour Wanderings”, so every picture will be of a place I have visited. Not just faraway places that I have been to on my travels but also local scenes as well, which are just as relevant. The name is a little bit corny, I know, but you are expected to give your exhibition a name, which I admit does give the show some sort of structure, rather than a motley collection of miscellaneous paintings.

The exhibition runs from 3rd to 20th May, so just under three weeks. We shall hope for a successful show. I shall be following up with another exhibition at the Royal Surrey Hospital starting on the 27th May and running for one month, so two bites at the cherry

Just while it goes through my mind, I get many “visits” to this art blog from all corners of the globe, and I am very grateful for your interest. It is so nice to feel that you are talking to someone. Comment if you want to. Thanks 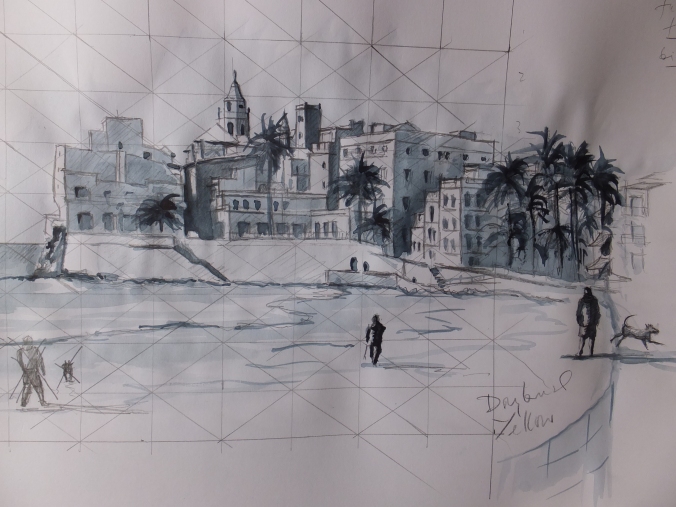 Probably the messiest sketch that I have done in a long time, but nevertheless it will do the job.

I have scratched out the figure in the bottom left corner, as he just was going nowhere. There were two dogs with him and they looked like pigs. I am going to substitute the figure on the far right, man and dog. They are strictly speaking in the margin, for as you can see they are out of proportion to the main picture. I sketched them from the screen which is rather like drawing from life, and which I had wished I had done before, instead of trying to scale from the photograph.

When I attempt to transfer this sketch onto watercolour paper I think I will trace the figures separately, and slide them round the foreground until they look right. I hadn’t intended to put a figure on the right hand side, but quite like in some ways, the effect of the righthand figure. I know he is out of proportion but nevertheless acts as a balance somehow. I will go through my photo library again and see if I can find someone

This is the thumbnail sketch of man  and dog. I quite enjoy doing these in real life, and they make a wonderful library of props that you can use in composite paintings. Drawing from the screen is easier in many ways as the subject doesn’t move about. I have seen other people do it, but never tried it before.

The tedious bit comes next. Moving the finished sketch or sketches onto watercolour paper. You have to trace some bits, and my conscience is clear as I am tracing my own drawing, but I do not like tracing. Boring and messy work. I wish I could wave a wand. However you can’t erase mistakes from watercolour paper without spoiling the surface so you just have to get on with it. At this stage I always make the point that I am still learning and welcome suggestions, if you have a better solution, please tell me. I use the Frisk product Tracedown which takes some of the tedium out of the job, but still looking for even more shortcuts.

This is the sketch against the photograph. What I hope to capture more than anything is not so much an architectural study, (so many of you will do that better than me), but more the effect of the strong light on the buildings with those delicious deep shadows.

After the tedium of transposing the drawing, comes the fun bit of deciding on the palette. The building far left which is bright white will need to be preserved with masking fluid. So will some of the details along the top edge, and so too will the sunlit edge of the walking figures.

Choice of colours? Well, my favourite base colour of raw sienna mixed with Naples Yellow which always looks sunlit as a base colour for buildings and beach. Some of the buildings, burnt sienna glazed with either permanent rose or cadmium orange. Phthalo blue in the mix for sea and sky, with maybe indigo along the horizon line. I bought Quinacradone Red the other day and am looking for an excuse to use it.

Once I have decided on the palette, I will publish it, just in case it is of interest. In the meantime, I will have to crack on. There is much to be done!

Just back from a few days in Sitges, not far from Barcelona. We hadn’t been there before so something of a treat. Still cold at night but during the day an agreeable 17-19 compared with our British 6 at the moment. There is nothing like winter sunshine to revive the spirit

As you can see from one of my pictures, all the ingredients for some really good paintings are there. Mediterranean sky, active sea, old churches, strong light, deep shadows with figure drawing thrown in. Some interesting side streets with iron window grilles and some strong colours should make for interesting material to work from.

I have just saved about 50 pictures so should get 2 or 3 at least, worthwhile compositions out of that lot. My next exhibition “Watercolour Wanderings” looms large. That starts on May 3rd and takes place at the Guildford Institute. That sounds a long way off but in painting terms is very close, and certainly Sitges needs to be part of my “wanderings”

Time to get started

Popular with Hippies at one time I believe. Understandable