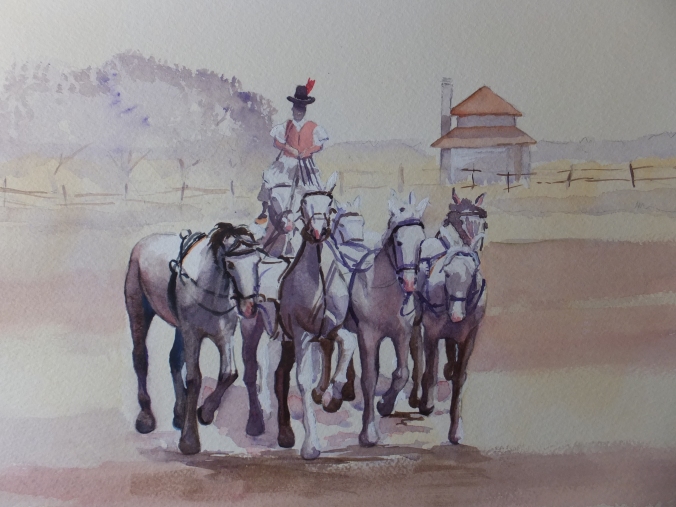 Well, this is the finished item

From the last painting, this was really just an exercise in detailing

There were many instances where the brush went too far, when putting in the shadows, so here I have repaired with white gouache. This was mostly around the legs of the second lead horse, so his forelegs do now, I think, look as they are catching the sunlight. Also I have redefined the ears and manes of some horses, which look a bit brighter now.

I kept looking and looking at what I thought was the finished item, thinking it was very black and white. Not that I have used any black whatsoever in this painting, just my usual mix of violet and transparent brown, but the darks did seem to veer towards black which bothered me. To get some colour back into the picture, I glazed the horses with dilute Alizarin Crimson, which has helped considerably, I think. It isn’t quite so obvious from the jpg, but better in the original, where some of the horses have taken on a strawberry hue, which is more convincing than before.

I have reinforced the pink muzzles, and given the rider a pink waistcoat in stead of a black one. He was wearing a white cockade in his hat, which I have changed to a crimson one.

The last horse painting Wild Horses in the Camargue did well. Let’s hope this one does too

I have just signed off my entry papers for next February’s exhibition in the Guildford Institute which is very much themed on paintings of waterways, so I shall be busy now preparing for that. Still, it is good to have that pressure 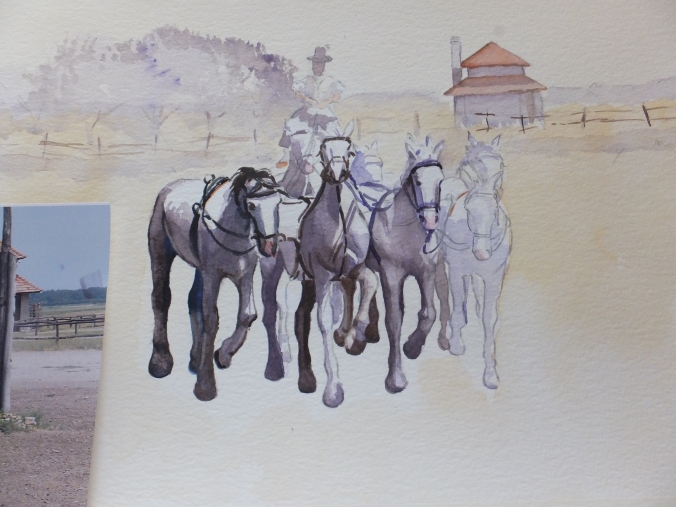 This is the story so far

Since the drawing I have lightly put in the shadows with Ultramarine violet, and allowed to rest for a while. The background trees and fence posts I have made deliberately hazy, hopefully to give the effect of the dust storm kicked up by the horses’ hooves. The horses were travelling at a decent canter, as I remember, and the day was hot and dry, so plenty of dust for us all to enjoy.

I have started to finish detail, starting with the front row of horses. I have used the same violet mixed with Transparent Brown by Sennelier, which I usually find to be quite a good warm weather shadow colour. In some cases, I needed more than one glaze, and then when that had dried out thoroughly, I started to wonder if I had gone too far. Just as an experiment, I lifted some colour out which enabled me to define muscles on the horses. It was not unlike sculpting in a way, almost carving the horses, and because it is a slow process it gives you time to get this fine detail, correct, hopefully

The characters of the horses seem different. Second from the left looks the most spirited. His head is up, and I see he is wearing the Martingale harness to stop him throwing his head back, which would tempt him to bolt. I think that is what it is called. A long time since I rode, but I remember that danger signal when the horse would throw its head back and then charge. Great fun if you have a long run for him to do it in. Scary otherwise.

The one on the left seems to be feeling the heat. They had worked hard, that is for sure

I would like to introduce a splash of hot colour somewhere, either Cadmium Red or Orange. Maybe something attached to the bridle like a ribbon or cockade. Not sure yet so will have to think. It needs something, I feel

The small green frog basking on a lily leaf somewhere in the wetlands of the Danube delta, posed quite happily as our small boat brushed by. All through this trip I have had an eye out for painting ideas, and I thought he would work well, so when I have recovered from the journey and settled back in, I might try painting him. There won’t be time for the exhibition starting on the 12th, but there is another local exhibition on the 29th which I might like to have something for

There were other things which were interesting, beautiful Hungarian horses which are half Arab, which we watched being put through their paces by the cowboys. This was near Mohacs out on the plains. The cattle were fantastic too, huge with long horns. One bare back rider controlled a team of nine horses standing on the rump of the last two, which was amazing, more like a circus act. Because of the distance from the rider to the front row of horses, they have to respond to the voice which means learning the language of the horse, a lifetimes work, I would imagine

Amazing sight, and might make a dramatic painting. I also took some shots of the ubiquitous stork nesting on the tops of telegraph poles, which are always amusing. We don’t have storks wild in the UK, well certainly not nesting like that, so we find them interesting

Just going back to the delta for a moment, we went there to see pelicans, which we certainly did, but not near enough to photograph. Plenty in the air and also landing but none would pose. Cormorants, swan and egret too. We were taken to the feeding grounds of these birds, and were told about the ingenious cooperation between the cormorant and the pelican. The cormorant dives for fish as you know, which causes the fish to surface where they are scooped up by the pelican in their elastic shopping bag beaks

The architecture and landscape would provide some good subjects but to be thought about. Three capitals, Budapest, Belgrade and Bucharest plus various smaller older towns, as well as the famous Iron Gorge with its stupendous scenery, all offer possibilities