A few weeks ago, we were lucky enough to be travelling in the east Mediterranean, starting from Turkey, sailing around Greece including some of the islands and then up the Adriatic as far as Dubrovnik.

On the way back to Greece, we should have called in at Kotor in Montenegro but rough seas prevented us docking. Instead we sailed for the nearest port that could take us, which was Corfu, which turned out to be something of a bonus

Not somewhere we had ever been before, so all was new. In the morning we had a guided tour up into the hills, where we enjoyed awesome views and walks round picturesque villages. We came back down into the capital, Kerkyra, which had been a British base in the c18, and where they still play cricket!

After lunch, we rambled at leisure around the shopping lanes, which were delightful. I took some pictures, thinking of possible paintings later, and one of them I shall append shortly. All those lights and darks reminded me of the work of Alvaro Castagnet. Maybe I will try something in his style which will be ambitious but interesting

Quite a selection of lights and darks to have a go at. Some of the drawing will have to be tidied up. I won’t want those large heads in the foreground, but will want some of those other figures to come further down the picture

So, this is the drawing. I have simplified some of the tangle of things like shop signs and awnings in the lane. Also, I have finished or almost finished the figures and made them into the foreground. The larger figure marked “mask”, I will mask out, as I would like him to have a white suit so that he stands out against the dark background. That is the plan.

Also I will run masking fluid along the edge of the church so that I get a crisp line against the blue sky. So, let’s see if I can find the next picture 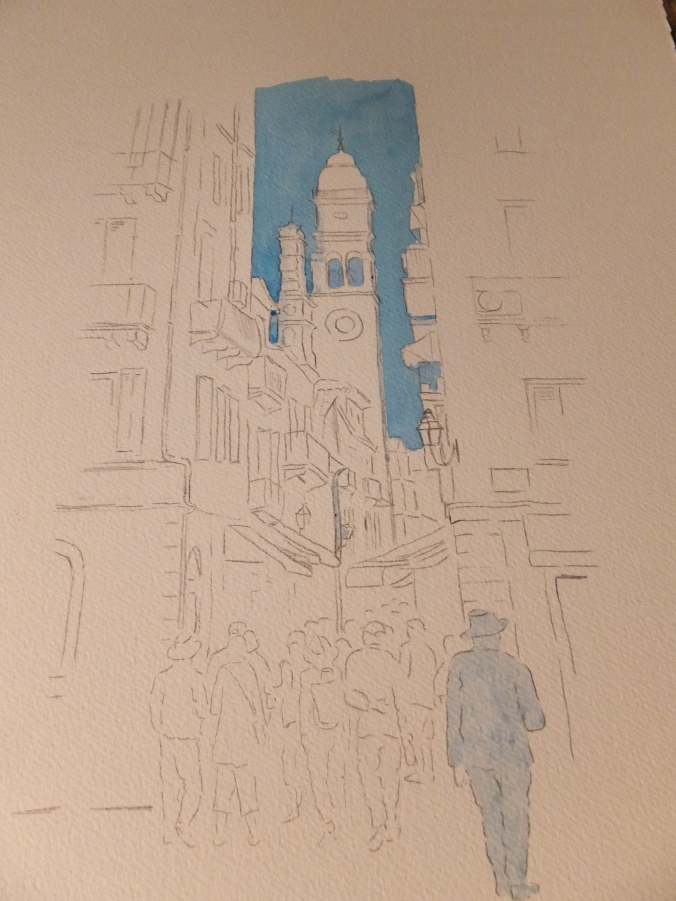 As you can see, I have put in the sky, mostly with a small brush, as some of the corners were fiddly. Ouch, too bright! I know that Mediterranean skies are that beautiful azure colour, but that doesn’t always work in a painting. Given more space, I could have run some of that colour off under the tap, but I couldn’t attempt that for fear of spoiling that white bell tower. I will have to live with it. Possibly when I paint the red dome, that will knock the blue back

As you can see, I have done the masking out. Not just the foreground figure and the edge of the bell tower, but also a narrow strip halfway down the lane on the left, which looks like an alley way catching the sunlight. In the next picture, I have done some wet-in-wet work, which will look rather messy at this stage

Looks a bit of a mess at this stage, I know, but we will carry on

I used a very dilute mix of Naples yellow with raw sienna, for the buildings including the bell tower. Almost white for the tower, but thickened up the colour for the other buildings. For those on the left-hand side, I used a wash of cadmium orange, even before the first coat was dry. I followed up with cadmium orange pigment straight out of the tube, for the shadow areas such as underneath the balconies.

There is a wash of shadow to go on yet, which will take some of the sting out of the orange. I need to let this dry overnight, as it has to be rock hard, before a very wet coat of shadow goes on

I am going to leave it there, if I may, as still quite a way to go, and certainly enough for another post, hopefully towards the end of this week. Thank you for reading my blog