I can highly recommend this exhibition at the Woking Lightbox. Their exhibitions just get better. I had no idea that Turner did so much work in Surrey, especially around Guildford in or around 1805

He painted Newark Priory Church plein air long before the Impressionists, and you may be able to tell from my bad photograph that his style then was getting towards an impressionist one. His later paintings like Rain, Steam and Speed were all about colour and not form, very much like the Impressionists. The ruined priory church is all that remains of a once complete Augustinian foundation, coming under Chertsey as I remember. It stands on private land so it cannot be visited only viewed from the towpath on the Wey Navigation, or from the road, and I rather think Turner made his study from the road. There was probably less traffic on the road than on the canal towpath in those days

From his room in the hotel, Turner sketched Quarry Street opposite. The scene is much the same as today, with the historic Star Inn on the right-hand corner and St.Mary’s, the Saxon church behind that. You can see the castle too. The building on the left, which is now Thomas Cook, has changed. I tried to photograph the sketch, but not too successfully 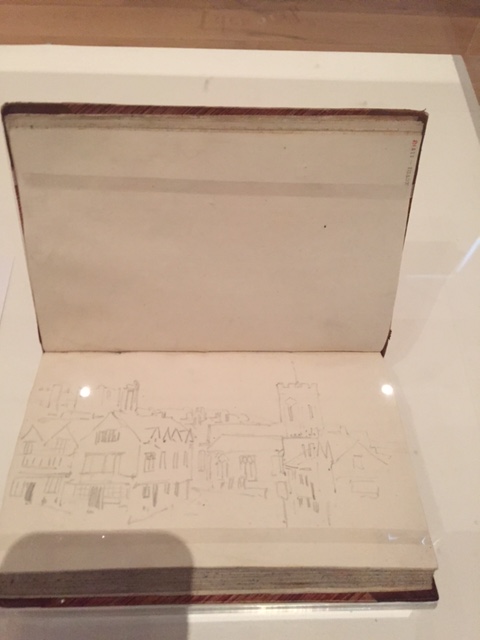 I have painted this view myself, so slightly eerie

He also painted and etched a very fine view of St.Catherine’s Chapel which stands just outside of the town on the Portsmouth Road. Ruined 13c, it stands roughly on the old pilgrim’s way, near where pilgrims would have been ferried across the river. No connection with pilgrims though, as it was built as a chapel of ease for the parishioners of Artington, to save them the long journey to St.Nicholas’ Church

There is more and I shall go back