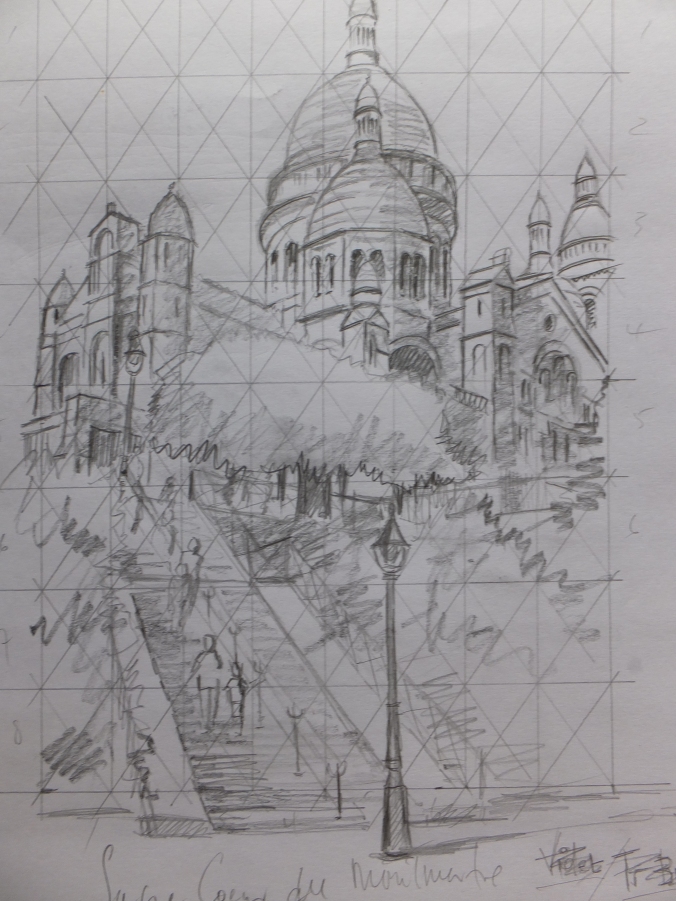 The Basilica of the Sacred Heart, Montmartre , Paris

This has always been a favourite area of Paris. I have wandered around many times taking pictures, and have used them for paintings afterwards. The artist’s quarter, the steps, the views over the roof tops and the Consulat have all featured in my paintings and have been popular at exhibitions, but for some reason, I have never painted the basilica itself

The basilica was planned or started about 1870, and was part of a Catholic revival in France. It was said to be partly a penance following defeat by the Prussians in the Franco-Prussian war, and partly to expiate the sins of the Communards during the Commune which followed the exile of Napoleon 111.

Napoleon III was captured by the Prussians after the battle of Sedan. His son, the Prince Imperial Louis Napoleon, a boy of fourteen, present at the battle, was spirited away to Ostende and thence to England by boat. His mother the Empress Eugenie, dropped everything and fled to England to join her son. In fairness, all was up with the imperial rule. her husband Napoleon III  was released by the Prussians and allowed to travel to England. Already a sick man, he died in exile in 1873.

The Commune , following the fall of Paris, saw much anti-church rhetoric and atrocities. The building of the Sacre-Coeur on the hill of Montmartre, a scene of much insurrection, was intended to heal the divisions in France, and create a church come-back. Certainly this was  a significant building

Using various photographs, I have made this pencil sketch on which to base a painting. I just haven’t worked out colours yet, although something sunlit I suspect. No doubt my favourite warm shadows using Sennelier Transparent Brown mixed with Violet will be present.

I have the task now of moving the sketch in very basic terms onto watercolour paper and then finishing a drawing ready for painting. So, as always we shall see.