When I finished the last post, I was about to put in the background trees and then the shadows on the buildings themselves

The trees I painted with a fan brush with crinkly bristles. Wide brushes like these are useful, as they can be used to pick up two colours at once, in this case French Ultramarine and Light Red. I used Sepia as well, where I needed to create definition, along the side of white buildings for example.

Imagining a low, bright light coming from the right-hand side, I used a blue – grey wash to put in shadow on every left-hand surface of each building including shadows that would have been cast on the ground. On the mill tower, which is round obviously, and which in real life is black, I again wanted to create the effect of bright light striking the round surface.  To get this effect. I painted blue-black down the left side whilst down the right half I brushed clean water. Then I let them meet. They did the job for me, and obligingly dried as I wanted. Along the left-hand perimeter, I brushed a thin line of neat Indigo, which gave the look of deep shadow on the far left.

Probably best to look at the image at this stage. 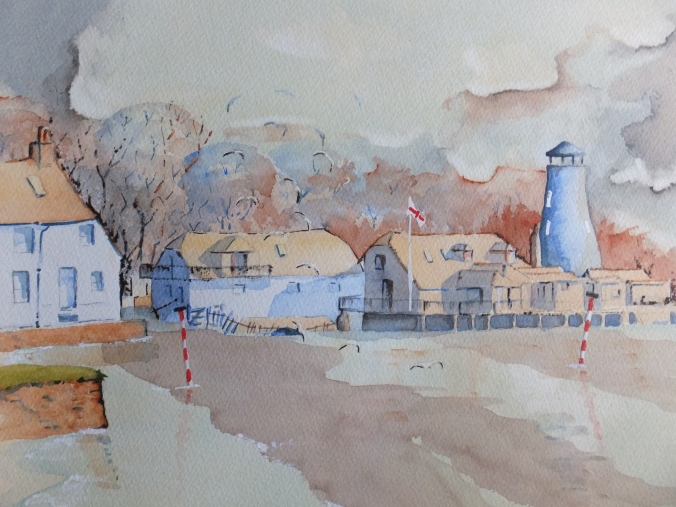 Sadly, the camera leeches out some of the colour no matter how many different lights I use for the photography. The colours are subtle, anyway, so notices on the jpeg, whereas the painting itself works perfectly.

As I said, when I started out, I was going to attempt the style of Rowland Hilder, the famous watercolourist. I have used his colours, but I think my own style has crept through. Nevertheless, I am still happy enough with the finished painting

So let’s talk through the detailing

On the left-hand building, I have defined the window recesses with Indigo, as well as the guttering and down-pipe, and the roof line with Sepia

On the centre building, again I defined the roof-line and painted a rickety fence in front of the sluice gate. I may have mentioned earlier, that this was a tide mill as well as a windmill, so seawater flowing through this tunnel would have powered grinding machinery somewhere. I can’t tell you more than that, I’m afraid, as these buildings were derelict when I was a boy in the 1950’s, and had been for many years, so nobody knew their history. Thankfully, they were restored for residential use.

The right-hand building took more work, as the space underneath where the house is standing on brick stilts, is very dark, and took various coats, even using some black eventually. Window recesses were defined as was the balcony.

It just left the masking fluid to be removed, and to paint in the posts and flag, which was a splendid opportunity to use Cadmium Red, nice and bright to guide the eye into the picture. The gulls were tinged with grey under the wings and black at the tips. We were done!

I hope that you enjoyed this long journey. Thank you once again,  for reading my blog