I had to finish yesterday’s post rather abruptly, as time was against me. Sorry about that

Every year the village holds its annual Scarecrow Festival. Villagers compete in producing scarecrows, sometimes commemorating a tableau of some event or perhaps depicting a well-known person.

In the year of William’s marriage to Kate, a tableau of the wedding was made in the parish church. Also, you may remember, if you watched the wedding on TV, that after the ceremony, as people were filing out of the abbey, the Dean did a cartwheel for joy along the centre aisle. He was also immortalised as a scarecrow and so too was the bellringer. Pictures follow hopefully

They were all good but I was particularly taken with the Cartwheeling Dean, and decided to use him as a model for a painting. If I can upload successfully, I will show you the finished article. 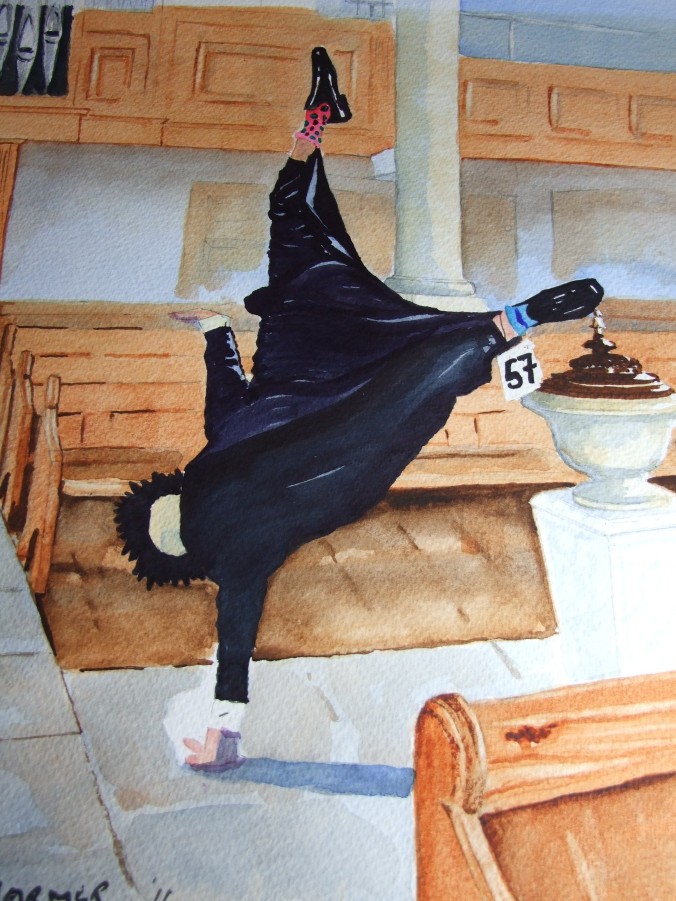 I was pretty pleased with the result. I fully expected to sell him at a local exhibition. Not a bit of it. Serves me right for being overconfident. No interest whatsoever locally, and in my reckoning, outside of the Pirbright area, who would want him?

I decided to cut my losses and put him up for auction online, where he sold for little money. A gentleman in the north-east of England bought him, which I found surprising. He wrote to me afterwards, and said that every morning he would look at this painting, and it would cheer him up for the day.

I am not long back from cruising around Turkey and Greece, and have brought back some good reference material for future paintings. One of the loveliest places we went to was the island of Corfu, and I have just started sketching out a drawing of a lovely little shopping lane in Kerkyra, the island capital

One of my favourite watercolour artists is Alvaro Castagnet, who depicts Mediterranean street scenes so brilliantly with his skill with lights and darks. I am going to try and emulate him, if I can, although I doubt if I will be successful. What I am going to borrow are some of his colours for mixing his “rich darks”, so a different pallette to what I am used to, which will be interesting if perhaps risky.

That will be something that I will share in my next post, probably nearer the end of the month. Until then………..