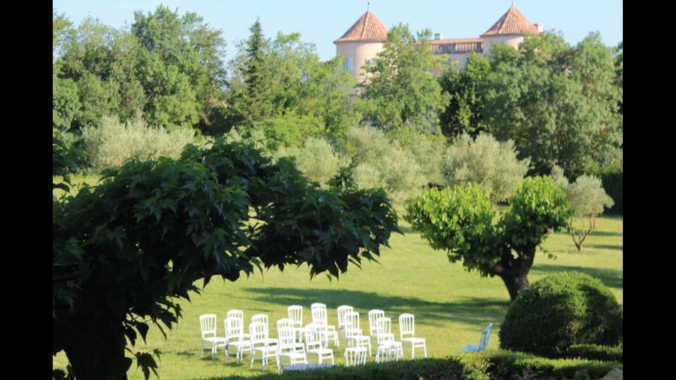 This was the latest commission, received earlier this month, required for a wedding anniversary at the end of May, so a deadline to be kept to, which concentrates the mind splendidly.

I am assuming this beautiful place was the wedding venue, but I am not really sure. It turns out to be a chateau in the south of France. Lovely to look at, but full of problems for the painter, not least the sea of greens which really take up the page. Just over the treetops, we can see pink rooftops of a building which I guessed might be a chateau, but only later was this confirmed

In the foreground, attractive conference chairs in white, laid out for some formal occasion. Amongst all the broad brush work, some very detailed work indeed. I do have now a very fine brush which points like a pen whilst retaining the capacity to hold quite a lot of water, so not running out continuously. I ended up masking these chairs, which was a tricky operation in itself, but I did use this brush for putting back the grass colour within the upright rails in the chairbacks

An express wish from the client was that the painting should be bright. The light is Mediterranean. No problem, we can do that.

The major change that I made was to cut down on the amount of green in the painting, and introduce some more red to give relief to the eye. I have exposed much more of the chateau than is shown in the photograph. This will be apparent from my photograph of the painting later, but suffice to say, I have taken over about 25% of the picture, with a red colour which I believe has helped the composition, and relieved the tedium of looking at virtually a monochrome image.

The client helped with this by providing an extra picture of the chateau showing the complete facade with its architectural details, and I was able to work from that. I believed this to be one of those occasions where the painting improved on the photograph. The client was delighted, which is always a relief.

As this commission finished I received another one, to paint different aspects of Canary Wharf for a leaving present, so I hope to do that justice. I don’t get that many so two in a month is heartening, especially as I had no sales at Leatherhead.

I attach the painting for interest

I kept the chateau deliberately hazy to indicate heat and distance. As far as the greens are concerned I used four, sap green and raw sienna mix as a base for the distant trees, Antwerp blue and lemon mix for the bright greens, sap green and ultramarine blue for the darks, and green gold for the lawn

4 thoughts on “The Latest Commission”