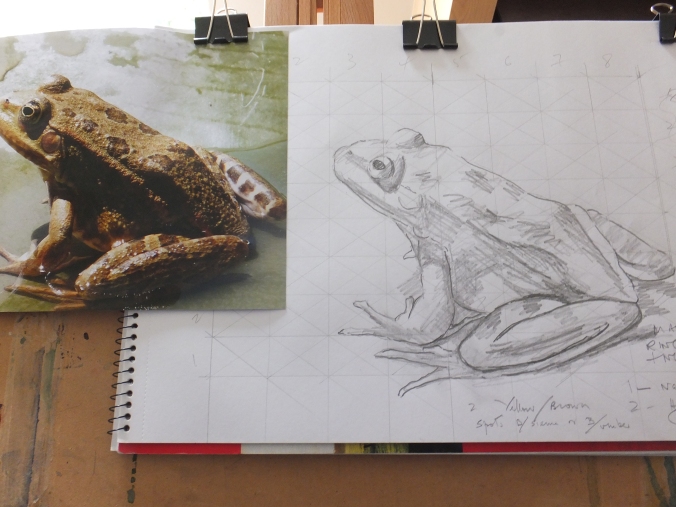 Something completely different to architecture this time, so really not sure how it will end up

You may remember that I posted the photograph of the frog a few weeks back, just after getting back from our trip down the Danube. We had been out in the wetlands of the Danube Delta to look at the fabulous wildlife there. Most of it was exotic, but moving too fast for photography, well at least my standard of photography anyway

The pelican were fascinating. We don’t have them in the UK, so watching them feed was very intriguing They seem to cooperate with the cormorants, who dive deep, which drives the fish to the surface, whereupon the pelican scoop them up in their elastic shopping bag of a beak

I just could not get a picture of them doing that which is a shame , because that would have made a really good subject for a painting. All I had time to photograph was my friend the frog. Actually there were colonies of them, basking in the intense heat and humidity, each one on a lily leaf. They did not seem in the least perturbed by the small boat gliding through the leaves, so very kindly posed for a picture

It will be interesting working out which colours to use on this painting. A background mix of raw sienna and Naples yellow as an undercoat, I think, and maybe a very pale green glaze , after this has gone hard. There will be some masking out of small details like feet, as the green round the frog will have to be darkened. The other colours will possibly be burnt sienna and burnt umber, which I will decide when I have seen the initial glazes.

The exhibition is still on at the Royal Surrey Hospital, with just another week to run. I have sold two to date, namely the painting of RHS Wisley Gardens and Bosham Harbour and Church. The latter is actually going home to Bosham as it is a wedding present for someone getting married in the church in the picture, which is rather nice. Also someone has promised to send their cheque in for one of the Venice paintings but that is only a pledge at the moment.

Would be nice to have one more. but two is respectable out of twelve paintings entered

2 thoughts on “The Little Green Frog, starting the drawing”