I came back to the painting, having given it a grey/green wash as I explained, then leaving it for 24 hours to go really hard. Then I started work on it again 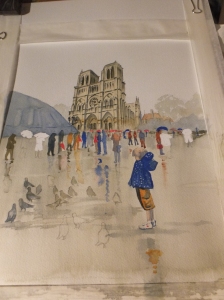 I started by putting detail into the foreground especially into Lola’s coat and trousers. This gave me a focus for the mid and background. I put some detail into the cathedral, not too much, as this is not an architectural study, but hopefully just enough. Gothic architecture is very ornate in detail anyway, and there is only so fine you can go with a brush

How I regretted including the marquee on the left. Once the colour went in, that shape was too dominant. I should have known better. I could just as easily have painted distant buildings and trees in that space. However I was stuck with it, so I have to continue. Incidentally I never abandon a painting halfway, even when it looks like being a disaster. Often it works out better than you think, and if you want to do it again , then you have made all the mistakes, not just some

On the second painting I started darkening the road surface in the foreground and putting in reflections. It was starting to look like a wet surface. I put some red spots in the painting, leading the eye from the foreground to the front of the cathedral. The Nike tick on Lola’s shoe, bags, coats, and umbrellas by the cathedral door. I used Cadmium Red. Nothing better in my opinion for catching the eye

Still that marquee bothers me. If I frame this painting I could crop about two inches off the left-hand side, which would help. It would also lose me a couple of figures from the queue and some pigeons, which would be sad. With that in mind I drew some extra pigeons in the foreground to compensate. The last picture is of the finished painting, so let’s have a look at it

By and large, I think the painting works. It certainly looks like a wet day, and maybe I will get used to the marquee. I think they were using it for an exhibition at the time

I hope you liked that little demo, and found something helpful. Let me know your ideas too. After all that rain, it will be nice to look at some hot weather subjects for a change. I have just returned from Turkey and Greece, where we had some rain, but also some sunshine, and I have some interesting photographic references to work on.

In the nearby village of Pirbright, between Guildford and Woking, where I belong to the Pirbright Art Club, we shall be having our Winter Art Exhibition 5th and 6th December, so I have got to get working on my entries. I will show you what I have done towards the end of the month, and also talk a bit about Pirbright which is an interesting village. Until then………